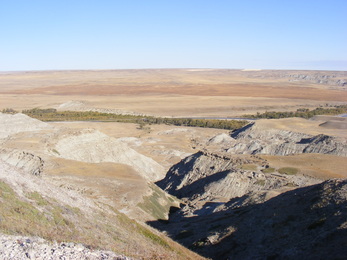 When Captain Lewis, accompanied by George Drewyer, Joseph Fields and Reuben Fields, set off north from the great falls of the Missouri on July 17, 1806 he started on a journey that would become one of the best-known adventures of the entire expedition.  They headed for the upper Marias where Lewis had been in 1805 when trying to determine which river was the right river to follow.  This time they were traveling overland by horse.  Two days’ travel got them to their objective.  They reached the Marias some six miles upriver from Lewis’ camp of June 5, 1805.  From that point the group turned to the west following the Marias to the mouth of Cut Bank Creek (Lewis called it the north fork of the Marias) then followed that river.
On July 22 Lewis could see the country for many miles.  As he surveyed the area, he could see where the river he was following flowed into the mountains.  As he recorded the time in his journals, “we arrived at a clump of large cottonwood trees in a beautiful and extensive bottom of the river about ten miles below the foot of the Rocky Mountains where this river enters them; as I could see very distinctly where the river entered the mountains and the bearing of this point being south of west I thought it unnecessary to proceed further.”  Lewis made camp with the intent to rest a couple days and take the necessary navigational reading.
The group actually stayed at this camp Lewis called Camp Disappointment until the morning of July 26.  Bad weather prevented Lewis from taking all the reading he had wanted.  That combined with lack of game and the discovery of a recently abandoned Indian camp all made the name very appropriate.  It was also here that Lewis reports his chronometer chose to stop working.  Lewis set his route to the southeast and soon reached the Two Medicine River (Lewis called this the south fork of the Marias) just below the mouth of Badger Creek.  Although the party was disappointed and keeping a close watch for Indians Lewis notes that this spot was the first place he saw all three types of cottonwood trees growing.  Most people would not have been able to make this distinction.
After leaving the Two Medicine Lewis climbed to the top of the hills to survey the area.  He saw before him what he had hoped he would avoid – Indians.  They had not seen him; apparently they were intently watching something on the river below – Drewyer.  The rest of that day and early on the next was taken up with the “incident on the Two Medicine” which was the only time during the expedition that a conflict between members of the Corps of Discovery and Indians resulted in death.
When the Indians were out of sight after the run-in Lewis and his party hastily packed up and fled the area.  The Indians had told Lewis a large band of their tribe was heading for the mouth of the Marias and would be there in a few days.  This information only added to Lewis’ need to hurry; he had to get to the Marias before the Indians did so he could warn the rest of his men that were coming down the Missouri from the great falls.
Lewis set his course to the southeast pushing the horses as fast as possible.  They traveled 63 miles before they dared to stop to rest and eat.  After resting an hour and a half, they pushed hard for another 17 miles before resting for another two hours.  After traveling another 20 miles by moonlight Lewis stopped for the night.  They had gone 100 miles.  The next morning the men suggested directing their route to the grog springs, but Lewis said that would add another day to their travel.  He continued on toward the mouth of the Marias.  After twelve miles they struck the Missouri about twelve miles west of their goal.  They had heard rifle shots that turned out to be the party coming downriver from the great falls.  Lewis and his party joined the others in the boats and soon were at the mouth of the Marias.  No Indians were to be found.
They stopped at the Marias long enough to recover their baggage they had cached there the summer before.  All was in good order except for some furs and some parched cornmeal.  They also could not find three of Drewyer’s beaver traps.  Upon examining the red pirogue that had been stored there, they found it badly rotted beyond use.  Lewis noted they “took the nails and other ironworks about her which might be of service to us.”  With this done the group returned to the boats, going fifteen miles farther downriver before daring to stop for the night.
As they were leaving the Marias rain started falling.  The rain continued until the afternoon of August 2.  Since the group had no tents it was impossible to get out of the rain until the evening of July 31st when they took refuge in some abandoned Indian stick lodges.  With no hope of getting things dried out, the next day the group pushed on downriver again taking shelter in abandoned lodges for the night.  Lewis noted that the river was running very high and the dry creeks they saw the year before were now running full of water.
Lewis was still concerned about catching up with Clark and everyone was anxious to get back to civilization.  The group only cooked in the evening, preparing enough for breakfast and the noon meal for the next day.  This allowed for 12-15 more miles each day.  Lewis had hunters out ahead of the group every day getting food for the day and skins for clothes and to cover the baggage in the canoes.
Proudly powered by Weebly