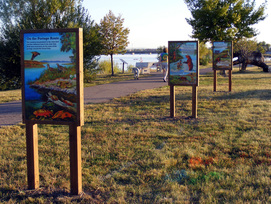 Interpretive Signs in West Bank Park tell of new plants and animals in the area
New to Science; Discoveries in the Great Falls Region
Phil Scriver
​
One of the instructions Jefferson gave to Lewis was to notice the flora and fauna of the area they passed through.  And notice they did!  After the Expedition returned to St. Louis in 1806 Lewis started making plans for the forthcoming edition of his travels.  The prospectus he put out showed that 1/3 of what he planned to publish would be devoted to natural science.  He planned to write a 2-volume account of his travel and an additional volume detailing the natural science.
Of course these volumes were never written so we can only speculate on what they would have contained.  What we have today is seven volumes of the daily notes written by the Captains.  Mixed throughout is the daily events, distances traveled, flora and fauna, ethnology, etc.  We contemplate that maybe we actually have a more complete record of the journey today because Lewis did not write his 3-volume account then toss the daily notes kept on the trip.  The complete daily record certainly reveals more about these two men than Lewis’ planned account would.  We see men completely occupied with a full day of activities of the journey, but at the same time carefully surveying the geography and other details of the area they traverse.  A single day’s entry may contain an account of the journey, miles traveled, who was out hunting and what they got, what animals were in the area (including fish, birds and insects), plant life, minerals in the soil and geographic features.  Today’s term would be that the Captains were “multitasking.”  The daily journal notes prove they were masters at that.
With all these pages filled with thousands of words it becomes apparent that the two Captains divided the duties.  However their writing duties were divided we can readily see that the Captains took their task of documenting the flora and fauna very seriously and they were both masters at observation.  Several books have been written dealing with the records kept including what they recorded as having seen, what they described that was new to science.
We hear many times over all about the plants and animals Captain Lewis described that were new to science.  What we hear very little about was the volumes of plants and animals that were more causally identified that the scientific community already knew about.  Important to that last account is that numerous times their descriptions helped to more fully define the area these plants were found in.  Some plants thought to only grow in a certain climate were found thriving in an area they shouldn’t have survived in.
Paul Russell Cutright’s book “Lewis and Clark Pioneering Naturalists” shows that in the Great Falls region Lewis and Clark discovered 10 plants and 17 animals that were new to science.  What they discovered and what was new has been the subject of some debate, but I chose his work because he best defines the terms he used in his decisions of new or not new.  He defines the word “discover” to mean had not been formally described at the time Lewis and Clark wrote their descriptions and therefore were unknown to the scientific world at large.
Cutright’s list of new animals includes three fish; goldeye, cutthroat trout, sauger-and eight birds-sage grouse, pacific nighthawk, Brewer’s nighthawk, white rumped shrike, long billed curlew, McCown’s longspur, pale goldfinch, western meadowlark.  His animal list is completed with the prairie rattler, water terrapin, Shira’s moose (smallest of several subspecies of moose), bushy tailed woodrat, thirteen lined ground squirrel, and the swift fox.  Plants new to science are Nuttall’s atriplex, greasewood, tansy, white currant, antelope brush, narrowleaf cottonwood, lousewort, scapose primrose, silvery lupine and red false mallow.
Most of these animals and plants were observed as the Captains were engaged in deciding which river to take from the mouth of the Marias or struggling to make the portage around the five falls of the Missouri.  However the cutthroat trout were caught for supper after Lewis and his party reached the Great Falls on June 13, 1805.  The prairie rattler was the snake Lewis killed while recuperating from his trip on June 14 when he discovered the four additional falls in the Missouri.
The animals most commonly associated with this region are the swift fox, thirteen lined ground squirrel, western meadowlark, McCown’s Longspur, sage grouse and prairie rattler.  Plants include tansy (rose) narrowleaf cottonwood and white currant.
The final aspect of natural science that the Great Falls region is well known for is the fact that it was where all the specimen that had been collected and cached were ruined when water got into their cache at the Upper Portage Camp.
Proudly powered by Weebly