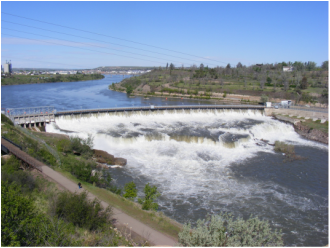 Black Eagle Falls are the uppermost falls. They are one of the features found along the River's Edge Trail today.
​Names on the Falls
Phil Scriver

Captain Lewis was the first person to record the five waterfalls on the Missouri River.  He viewed the one farthest downriver on June 13, 1805 and called it the Great Falls.  The next day he went exploring upriver and to his surprise in about five miles he encountered a series of three more falls within about a half mile of each other.  The first one he described as crooked so he appropriately named it Crooked Falls.  A few hundred yards upriver Lewis set his eyes upon a “cascade of about fifty feet.”  He glowingly described and called it a Handsome Falls.  The third one was quite small with only about a six foot drop.  Lewis commented that compared to the others it was pretty insignificant, so he “passed by it with but little attention.”  He did not give it a name.
​               By now Lewis was anxious to see what else lie in store, so he eagerly continued his journey up the river.  After he had traveled another two and one half miles he encountered yet another falls of about nineteen feet.  Once he had determined it was the last falls in the area he called this one the Upper Pitch.
Lewis wrote in his letter from the falls to Clark who was coming up the river with the boats that this Upper Pitch answered the description of the falls the Indians had described to them at Mandan.  They had told the Captains about the black eagle with a nest in a tree below the falls.  Thus Lewis knew absolutely they were on the Missouri River.
In the summer of 1872 Thomas Roberts led a survey crew for the Great Northern Railroad down the Missouri River from Helena into the Great Falls area.  As they were examining the first falls they came to, Roberts saw a large black eagle fly out of a cottonwood tree that was growing on an island just below the falls.  He remembered having read a report written by General Reynolds that related the same sighting in 1860.  The General’s report also mentioned a Jesuit missionary had seen that eagle’s nest in 1830.  Captain Lewis had written in his journals about a young cottonwood tree and eagle’s nest on an island below the Upper Pitch in June of 1805.  Roberts declared the most fitting name for Captain Lewis’ “Upper Pitch” to be “Black Eagle Falls”.
Later, after the city of Great Falls had been established by Paris Gibson he saw fit to give a name to the little waterfalls that Lewis had passed by without naming.  He called it Colter Falls.  Why this name was selected is not recorded, but probably because in the early 1900s Colter was the most famous member of the Expedition after the two Captains.  He also renamed Lewis’ Handsome Falls to Rainbow Falls.
Today the Falls are named Great Falls, Crooked Falls (sometimes called Horseshoe Falls), Rainbow Falls (some still call it Handsome Falls), Colter Falls (this one is covered by the water behind Rainbow Dam), and Black Eagle Falls.
There are hydroelectric dams on Black Eagle Falls, Rainbow Falls and The Great Falls.  Two other hydroelectric dams can be found on the river, but neither one has a waterfall under it.
A visitor to these falls today may wonder how Lewis could have become so excited by these five small waterfalls that frequently don’t flow enough water to even cover all the rocks that form the falls.  But the visitor needs to understand that since Lewis described the “sublimely grand” Great Falls and the “pleasingly beautiful” Rainbow Falls three dams have been constructed on these waterfalls that control the flow of water in the river.  Additionally, nearly a decade of drought has drastically reduced the total flow even more.
Proudly powered by Weebly