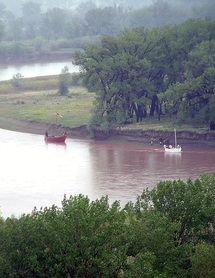 Solving the mystery of the Marias required careful examination of the two rivers
The Marias:  defining the Corps of Discovery
​ Phil Scriver

It is just a small river, even by the standards of the western prairies it runs through.  But it nearly cost the Corps of Discovery its very life.  By assuming a frisky character known only during the late spring flood season, this river, masquerading as something much greater than it actually was, caused the Expedition to spend at least an extra week of precious time discovering its real nature.
A close examination of this river reveals a great deal about Captains Meriwether Lewis and William Clark and the entire project of “discovery of the interior of the continent of North America.”  Such an examination reveals what sets this exploring party apart from all the others and why it was ultimately so tremendously successful in doing what it was supposed to do.
In his book, River of Promise, David Nicandri discusses geography considerations faced by the Expedition as they traveled through the mountains of Western Montana and Idaho.  He appropriately points out the Expedition was totally at a loss in that area even with a native guide.  The entire Expedition could have easily perished if it had not been for friendly natives who helped them through the area.
However, they were also struggling with their paradigm of “continental symmetry” so were not really using their full capabilities.  This part of the journey was not a true representation of the Captains’ real abilities.
When the Corps of Discovery first saw this unknown river on the evening of June 2, 1805 they were collectively baffled.  For a thousand miles they had followed the Missouri River knowing they were on course with only cursory references to maps and notes they had to keep them on track.  But this river was not in their collected references from St. Louis or their winter at Fort Mandan.  Bernard Devoto said that Meriwether Lewis had no rival in his ability to read the geography of the land, except for William Clark; a very bold statement considering all the other explorers who traversed the continent turning an unknown land into a known one.
By reading both Captains’ journal entries for the first few days of June we see how they studied the land and concluded that the South Fork was the Missouri River they should follow.  Those journal entries show just how the Captains’ minds digested the evidence at hand.  The Captains reached that conclusion in one day’s time.  We find in this episode one of the Expedition’s finest hours.  But if we continue to read those journal entries we learn so much more.
When Jefferson first formulated this expedition he specified it should be a military unit.  One of the reasons for him making that requirement was the military discipline system that resulted in the men following orders from their commander.  That is a great theory, but if a person reads about other military expeditions and campaigns they will quickly discover how frequently orders were not followed or men deserted.  The abilities of the commander played a major part in orders being followed.  As both Lewis and Clark learned first-hand in their early military years during the Indian Wars poor training resulted in desertions and failed campaigns.
When the Corps of Discovery formed at Camp Dubois during the winter of 1803-1804 Clark put his training to good use and developed a cohesive military unit as Jefferson had specified.  But he went well beyond that expected basis.  As a result of his, and Lewis’, training and personal abilities as leaders the Corps of Discovery that left that spring was a team, officers and enlisted.  Respect for leadership and followship had been earned.
In the eyes of the men, the Captains had earned the right to be the leaders by the way they conducted themselves and the “office of commander.”  Fairness of work assignments, appropriate discipline, adequate input into decision making, responsibility spread as needed all made this happen.  These are all the things that effective leaders today do to earn the respect of the men they command.  A mutual trust among the men enabled a cohesive team to develop.
The Captains careful geographic decision followed by the men’s statement that they all disagreed, but would cheerfully follow wherever the Captains chose to lead and the Captains’ decision to take an advance party up the river they selected were the result of careful preparation by people with knowledge and used to making decisions.
So far we have seen the Captains made conscious decisions as the journey unfolded.  But the story of the Marias also shows an inner quality both Captains possessed that served them well.  Although they had spent months in planning and preparation for the expedition they did not hesitate to make changed when they encountered a situation that required it.
As the “decision at the Marias” saga came to its conclusion Jefferson’s requirement to send a military unit to explore the Northwest was vilified.  The Corps of Discovery’s planning and training proved to have been the keys to insuring a successful mission.  A great deal of hard labor lay ahead, but the Corps showed it was ready for any challenge that presented itself.
Proudly powered by Weebly