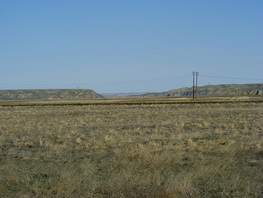 Notch in the canyon is where the Teton River turns north away from the Missouri.
A Most Explorer Place​
Phil Scriver

A “V” shaped piece of land that stretches some sixty miles along the north side of the Missouri from the mouth of the Marias to the great falls of the Missouri is arguably the most explored part of the Corps of Discovery’s trail to the Pacific Ocean, excluding their winter camps.  No less than five different times small parties traversed this area; twice in 1805 and three more times in 1806.
To try to determine which river to follow from the mouth of the Marias the Captains decided they would each lead a small overland party up the rivers; Lewis went up the North Fork (Marias) while Clark took his party up the South Fork (Missouri).
Clark set his route to make a series of arcs across the plain between the South Fork and the Tansey (Teton) River, starting at the river then arcing out onto the plain and returning to the river.  Using this method he could ascertain the character of the South Fork and the plain to the north.  After traveling about 40 miles upriver Clark became convinced by the geography he saw that the South Fork was the proper course (although he was about 10 miles below the great falls so he never saw them).
He turned his party northeast to return to the Marias camp.  This course took them diagonally across the plain between the two rivers.  He reached the Tansey about fifteen miles upriver from its mouth on the Marias (which is about 1 ½ miles upriver from the Marias’ mouth on the Missouri) at the place where the river makes a sharp turn to the north greatly widening the V plain.  From that point he followed the Tansey to the Marias camp.  Clark had traveled across the wide part of the V shaped plain.  Along his route much of the plain west of him was visible.  Thus he got a tolerable good reading of the geography.
Once the Captains decided the South Fork was the proper channel to follow they devised a plan where Lewis would take a small advance party overland up the Missouri to find the falls they were certain lie somewhere not too distant upriver.  When Lewis and his party left the Marias on June 11 they traveled this strip of land that lie between the rivers for about ten miles until they came out on a broader plain.  The South Fork turned to the southwest making the strip of land grow wider.  Lewis adjusted his route to make several arcs across the land between the rivers over the next forty miles.  His route resembled a large letter “M” with the bottom setting on the Missouri and the tops reaching a line of hills that afforded an undisturbed view of the prairies.  Lewis could see the canyons formed by both rivers.  By the time Lewis and his party reached the great falls on June 13 they too had a good evaluation of the geography of the piece of land.
As you can see during the trip upriver in 1805 each Captain explored this modest plain and developed a good understanding of the geography.  On the return trip in 1806 the knowledge of this area would be utilized by Captain Lewis and Sgt Gass, who had been with Clark in 1805, as they crossed north central Montana heading to the mouth of the Marias.
When Lewis and his three companions left the great falls in 1806 to explore the upper Marias they headed north across the plain reaching the Teton (Tansey) River north of present day Carter.  Lewis had traveled much of this same land the summer before.  From that point he continued north to the Marias then up that river to reach Camp Disappointment, the farthest north he would go.
After the brief encounter with the Blackfeet Lewis used his acquired knowledge of the area and set a southeasterly course (across the plain between the rivers) that would take his party to the mouth of the Marias where he was to join Sgt Ordway with the canoes.  In his haste to reach the Marias and warn Ordway of the large Blackfeet force he had learned of from the small party he had a chance encounter with, Lewis failed to follow the course he set and went too far south.  He reached the Missouri about 20 miles upriver from the Marias.  But as luck would have it when he got to the Missouri Ordway and his party was at that spot on the river.
When Ordway and his party had completed re-portaging the great falls of the Missouri they had four horses to deal with.  Rather than turn them loose on the prairie, it was decided that Sgt Gass would take them overland to the Marias so they could be used by the hunters while they waited for Captain Lewis.
Sgt Gass and Pvt Willard took the horses across the river, to the north side, and followed a course very close to the course Clark had taken the year before as the Captains pondered which river to follow, the North Fork or the South Fork.  Gass struck the Tansey near the spot Clark had, then followed that river to its mouth on the Marias, then to the Missouri, reaching there within minutes of when Lewis and his now large party had.
When recording his encounter with the Blackfeet party and his flight to the Marias, Lewis lamented that on the night of July 27 when his little party finally stopped to sleep they were alone on the endless prairie except for the buffalo, antelope, etc.  Little did he know that camped only a few miles away on the Tansey were two other men of the Corps of Discovery.
Proudly powered by Weebly