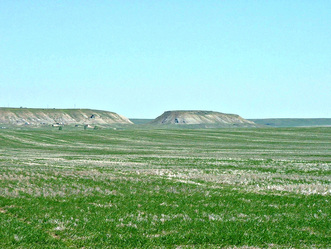 These hills are what Lewis described as "two curious hills." Today when viewed from where Lewis saw them they answer his description of 200 years ago.
Landscapes Today and Yesterday
Phil Scriver

​            One of the more interesting considerations in telling the “Great Falls story” of the Corps of Discovery’s trek is the landscape the Expedition traversed.  The main geographic feature is the Missouri River, but since it was their highway for a large portion of the journey, that river does not help identify a particular region.  Additionally, most parts of the river have changed over the last 200 years since the Corps of Discovery trekked across the continent.  But there are certain features on the river that can be used for landmarks to identify localities.  The first such landmark used to identify the Great Falls Region looks today almost identical to what Lewis described on May 31st 1805 when he wrote, “The hills and river cliffs which we passed today exhibit a most romantic appearance.”  The ‘white free-stone’ he described that day are now known as the White Cliffs.  Other landmarks that are used to make the region unique are the five falls of the Missouri, although they are somewhat changed by construction of hydroelectric dams above three and the smallest falls is now covered by the backwaters of one dam.
The Captains described Barn Mountain, Fort Mountain, Tower Rock, Sulphur Springs, Giant Springs; Island Mountains now known as the Sweetgrass Hills, Bear Paws, Snowy Mountains and Highwood Mountains; a network of smaller rivers, Teton (Tansey), Marias, Sun (Medicine), Smith and Two Medicine along with Belt (Portage) Creek and Box Elder Creek (Willow Run).  All of these features are remarkably like they were 200 years ago.  Descriptions from the journals can be used to easily identify each one today.  Even the two curious hills Lewis identified just east of the present city of Great Falls on June 13 are readily apparent.
One of the intriguing aspects of living on the Expedition’s route is that although the surface features are different today from what Lewis saw journal entries still identify the landscape.  When Lewis made his overland trip from the mouth of the Marias to the great falls of the Missouri he described the geography of area he passed through so well that a person today can take those entries and see the same hills, valleys, small creeks and distant mountains.  When walking across the prairies today the route he described can be found and followed.  With a little imagination the wheat fields become short prairie grass Lewis trod and cattle become buffalo.
Another aspect of the landscape today is that although we think of the Expedition as traveling by water, most of their travels in the Great Falls region were overland.  Lewis’ trip up the Marias in 1805 and in 1806, Clark’s trip up the Missouri in 1805, the 1805 portage, the 1806 portage, Lewis’ trip from Traveler’s Rest to the great falls in 1806 and Lewis’ return from Camp Disappointment and meeting the Blackfeet on the Two Medicine River were all overland journeys.  Clark’s trip with the main party from the Marias to the great falls, Ordway’s trip from the Three Forks to the Upper Portage Camp and the Expedition’s journey after portaging were the only water trips.