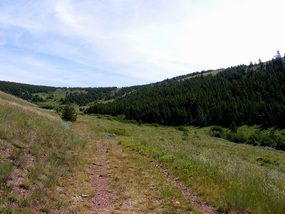 The ridgeline that forms to Lewis and Clark Pass over the continental divide in the Rocky Mountains. Lewis recorded the climb up to the pass from the west (going east) as relatively easy. As you can see he was right.
In Retrospect
Phil Scriver
​
The portage of 1806 was only recorded by Gass and Ordway and maybe Whitehouse.  Neither of the Captains was involved so they didn’t write about it.  Whitehouse’s journal only goes to the first part of April 1806.  We don’t know if he quit there or from that point forward is lost.  The two sergeants devoted 8 pages to this portage.  By contrast a total of 85 pages written by five different journalists record the 1805 portage.  Consequently we know much less about the 1806 portage.
The locations of several camps referred to can’t be determined.  Where they camped on the portage on the 22nd, where Gass and Willard camped on the Teton the night of the 27th or where Ordway and the boats camped that night remain unknown.  Looking at the map, if Gass set a course Northeast generally following the course of the Missouri until it turns to the east, he would have struck the Teton between Carter and Fort Benton at about the same place Clark and his party, which included Gass, did June 5, 1805 when they were trying to figure out which was the Missouri River.  That point is where the Teton cuts through the hills from the north then turns and flows east and can be easily seen from the highway.  But, because of the very limited details in the journals we can only guess.
The Lewis and Clark Expedition is known as a journey that used America’s major western rivers as their travel routes.  The men of the Corps of Discovery rowed and pulled their boats up the rivers until they reached the Missouri’s headwaters before changing to using horses for the overland crossing of the Rockies.  Once over the mountains they again took to their boats to finish their trek to the Pacific Ocean.  The Great Falls of the Missouri caused two big changes from that general pattern.
When the Expedition reached the Falls they had to complete their transition to canoes from the boats that were used on the rivers to the east.  The rivers above the Falls were much smaller and could only accommodate canoes and other light watercraft.
The falls area is also unique because most of the movement in this area was by land.  While the Captains were exploring the area to decide which river to follow the parties traveled overland.  Later when Lewis took the advance party from the Marias and found the Great Falls he made an overland trip while Clark followed with the boats.  Of course the 18 mile portage and re-portage were overland.  In 1806 when Lewis returned to the Falls and made his exploring trip north to Camp Disappointment he went overland.  The only other water trip was after the re-portage when Ordway took the boats and baggage that had been cached at the Falls and continued down the Missouri for an eventual reunion with Lewis at the Marias and Clark at the Yellowstone.
Proudly powered by Weebly